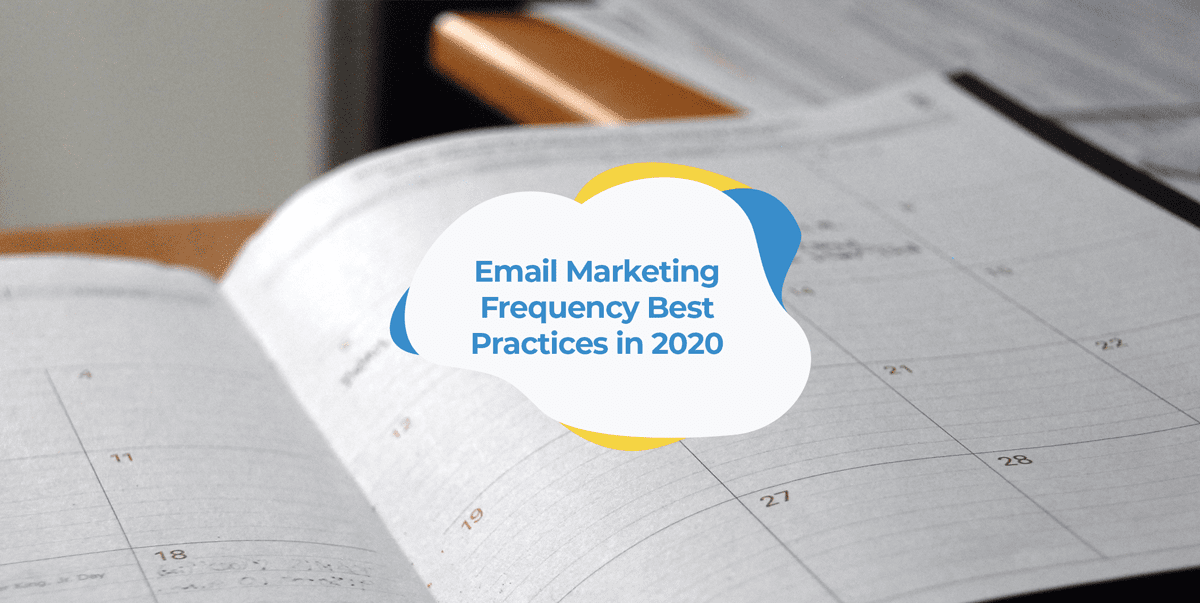 We get asked a lot of questions about email marketing. But if there’s one question we get asked more than anything else, it’s how often to email customers.

Questions about email frequency (also known as email cadence) dominate discussions we have about marketing strategy with our users. And if one thing’s clear from these discussions, it’s that merchants are concerned about getting their send frequency right.

We understand this concern.

Send too many emails and you become another spammer who just annoys their subscribers causing them to unsubscribe. On the other hand, send too few emails and your email list will become disengaged and start forgetting your brand.

It can be hard to find the sweet spot. Especially for small businesses who are only just starting to send out email campaigns.

Acquiring the first few hundred email addresses isn’t a walk in the park so new merchants don’t want to tarnish the relationships they’ve built. Particularly when these early subscribers usually represent the most loyal and engaged people on an email list.

That’s why we’ve decided to take a look at the data we have on email frequency statistics.

SmartrMail has thousands of e-commerce merchants sending emails with us to over 100 million subscribers. Most of these merchants have small to medium sized businesses, which makes our data perfect for similar merchants to gain smart insights from.

While our users are spread out around the globe and sell a variety of merchandise, there’s a clear trend in how often they email their customers.

To get an idea of how often merchants are emailing customers, we’ve decided to just look at bulk email campaigns. We’re not taking into consideration automated campaigns like welcome series, abandoned cart or order confirmation emails.

These triggered emails are not sent to everyone on an email list and are only sent when a particular subscriber meets certain criteria. So the frequency of these emails depends on the individual subscriber.

If they’ve agreed to receive marketing emails after making a purchase, then they’d receive a higher than usual number of emails in the first few weeks. After all the order and shipping confirmation, welcome and post-purchase followup emails are sent, the frequency of new emails drops off dramatically.

To prevent this from skewing the results, all automated emails have been excluded. So keep in mind that all of the following statistics only concerns bulk newsletters.

With that caveat out of the way, looking at how often users send bulk emails, we get the following results.

Typically merchants are only willing to send between one and four bulk email campaigns per month to their subscribers. This is roughly up to a single email per week.

Nearly one in five merchants are sending between five and eight bulk emails per month, or between one and two times a week. Hardly anyone is sending more than 16 emails a month, which would translate as at least one email every second day.

Clearly merchants tend to be conservative in how often they’re emailing customers.

The question however is whether ecommerce email marketers need to be this cautious? Are those emailing their customers more regularly achieving better results than those holding back?

How Often Should You Send Email Marketing?

Now that we’ve looked at how often merchants are emailing customers, it’s time to look at how subscribers are responding to these frequencies. From this we can then determine what the email marketing frequency best practices are.

By taking a look at open rates and comparing it to the average number of  email campaigns sent per month, we get the following results.

From this, the best results are achieved by merchants sending between four and eight emails per month.

Those sending between nine and 16 achieve a similar open rate to merchants who send fewer than one per month. Open rates then drop off a cliff as soon as you start sending more than one email every second day. This is strong evidence that your subscribers do not want daily emails from you.

A slightly different story emerges when you take a look at click rates.

Here we still see that sending between four and eight emails a month is optimum. However sending less frequently appears to be nearly as bad as over sending.

This highlights the need to keep your email list engaged by sending regularly. If you send less than four emails monthly, you run the risk of them losing interest in your content and no longer clicking through to your site.

It also reaffirms the risk of sending too many emails. Send an email every second day or more and engagement plummets.

Opens and clicks are great, but in e-commerce the most important metric is how many sales your email campaigns are bringing you.

When we take a look at how a merchant’s monthly average number of bulk emails affects the number of sales they receive, we see an interesting pattern.

The percentage of clicks that result in a sale appears to follow a clear downwards trend. The more often you send bulk email marketing campaigns, the more clicks it takes to generate a sale.

At first glance this appears to suggest that even weekly emails is too much. But let’s fully unpack the results.

Your customers are only ever going to spend so much with your store. While you can encourage them to make more purchases, there’s a point at which they’re not going to spend anymore.

Sending more emails isn’t going to push someone past their spend limit.

The question is how many emails does it take to get your subscribers to this point.

If this point was reached at one email per week, then you’d expect the sales conversion rate to be 50% lower for between four and eight emails per month. Seeing as you’re sending double the number of emails without increasing sales.

However this is not what we see. Instead the reduction is smaller, suggesting that sending more than one email has a slight positive effect on sales. In other words, sending two emails a week increases sales, but doesn’t double sales compared to only one.

Here we see the effect of diminishing returns. Each additional email you send does a worse job at generating extra sales than the email before it.

Very quickly you get to a point where sending emails more frequently doesn’t bring in more sales at all. Eventually it’ll end up hurting your sales as people disengage and unsubscribe from your emails.

How Many Email Blasts Are Too Many?

So what does all of this mean? How many emails are too many?

It seems that between one and two emails a week is the sweet spot.

Ultimately your optimal frequency will depend on your store and subscribers, but this is a good starting point.

While you might be able to get away with sending an extra weekly email, pushing out any more definitely gets you into spammer territory. And if you’re still thinking of doing this, remember that receiving too many emails is the number one reason people unsubscribe from lists.

When it comes to best practices for how often you send email marketing campaigns, there are a few things to keep in mind:

Of course, every store is unique. If you’d like to dig deeper into what’s best for your store, we also have a guide on how to determine your store’s optimal send frequency.

The one thing to keep in mind, above all else, is to ensure that you’re delivering value with your emails. Whether it’s great content or personalized offers, as long as your subscribers continue to receive something of value, most will continue to engage with your campaigns.

If you’re looking for more marketing statistics to help you with your email marketing, we have also taken a look at the best time to send your email campaigns.