SmartrMail > Case Studies - Email Marketing Tips > What Day Should You Be Sending Your Email in 2020? 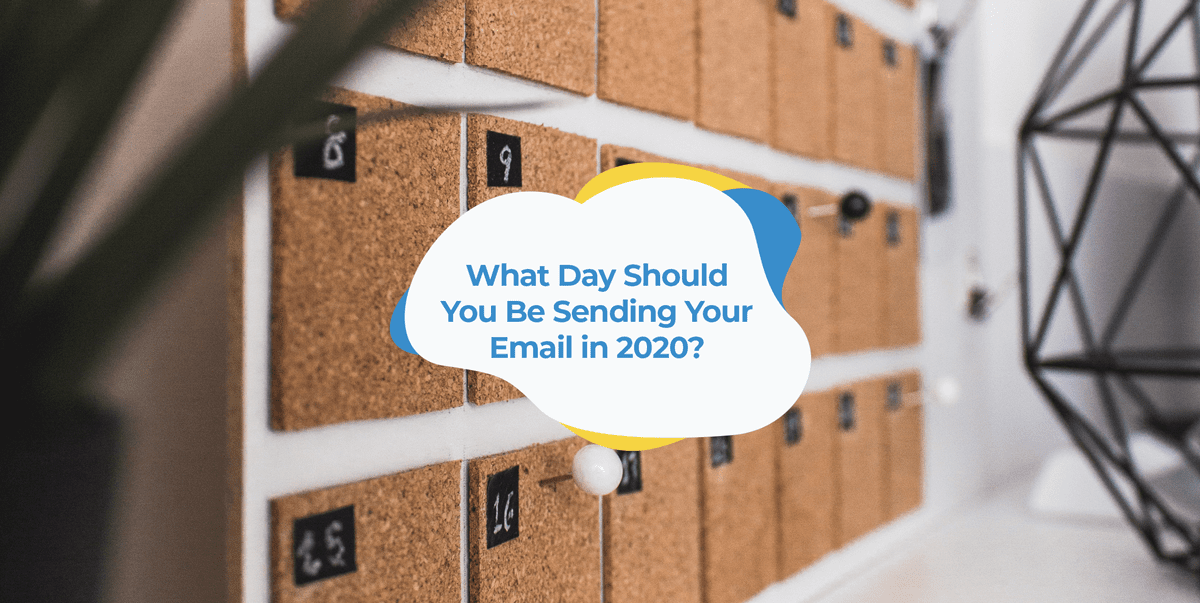 What Day Should You Be Sending Your Email in 2020?

It’s a question as old as email marketing itself. It’s a thought that crosses the mind of anyone doing even the smallest amount of email marketing. And it’s not an unusual question for people to be asking.

It’s only natural that this obsession with constant optimization extends to the time you hit the send button as well.

Having your email land in someone’s inbox at the right time can drastically increase the chances that your recipient opens and reads it. Likewise, send your email at the wrong time and you risk it being ignored and never opened. No wonder marketers want to know what the optimal time is.

There is no shortage of answers to this question. If you’ve searched Google for an answer you’d have come across the plethora of case studies and research into which days have the best open and click through rates.

The result of all of this data is a general consensus online is that Tuesday is the best day to send your email to achieve the highest possible open rates, followed by Thursday and then Wednesday.

For instance, HubSpot concluded in their 2015 email marketing report that Tuesdays have a slight advantage for open rates.

After Tuesday, HubSpot found open rates gradually dropped off for the remainder of the work week with Friday being the worst weekday. Monday was tied with Wednesday for second best. By far the worst time to send emails according to this study is at the weekend with open rates being less than half that during the week.

Similar results have been replicated by other studies.

In 2013, MailerMailer also found that Tuesdays have the best open rates with the weekend, especially Saturdays, having the lowest open rates. 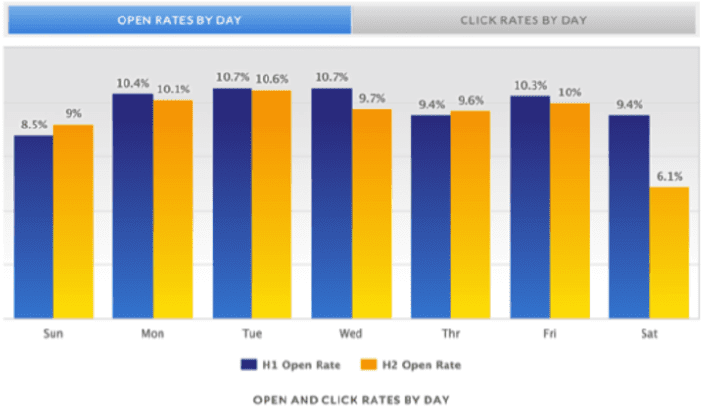 While most studies online confirm that Tuesday is king of open rates, the broader trend of weekdays performing better than Saturday and Sunday is confirmed in even more studies. In 2014, WordStream found that Thursdays and Wednesdays have a slight advantage over Tuesdays, but reaffirmed the weekday/weekend divide.

What do SmartrMail’s Stats Show in 2020?

Seeing as most of the studies mentioned above range from all the way back to 2013, we decided to see if our latest data matched the consensus

To do so, we took 350 of SmartrMail’s top senders and looked at their open and click through rates over 90 days. In total, we looked at opens and clicks for over 36 million emails.

Originally we were expecting to see similar results to the studies above, however what we found instead was far more intriguing.

For open rates, our data shows that Tuesdays and Thursdays have an advantage over other weekdays. This is consistent with most other studies showing that it’s either of these days that have the best overall open rates.

Surprisingly however, we found that both Saturday and Sunday had better open rates than any other day of the week. Even higher than Tuesday and Thursday. 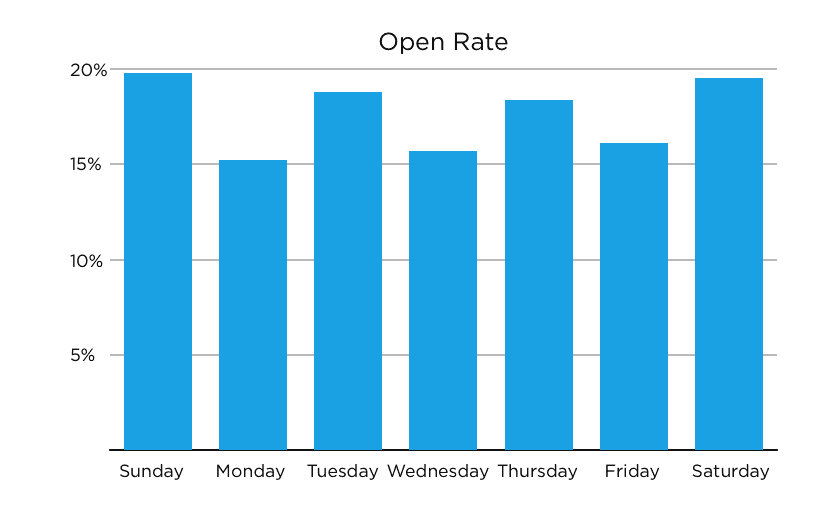 When we looked at click through rates, Tuesday become the second best performing day, only slightly behind Saturday. However, again we saw that both Saturday and Sunday perform much better than all the other days of the week. 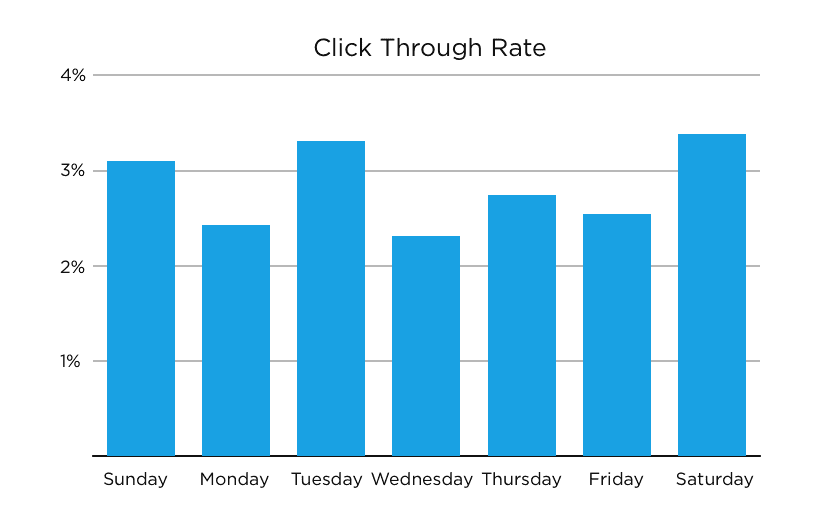 Making Sense of These Findings

The traditional thinking as to why Tuesday, Wednesday, and Thursday all perform so well is that most people check their emails while at work. Mondays don’t see as good results because people tend to treat Mondays as day to plan for the coming week and are often preoccupied with Monday meetings. Fridays are also thought to have a slight drop off in performance as some people tend to start their weekends early. Either by actually having the day off or simply no longer being as productive.

Traditional thinking would also explain why Saturday and Sunday see such massive drop offs in performance too. Few people are in the office checking emails on these days.

So what is going on with our results then? 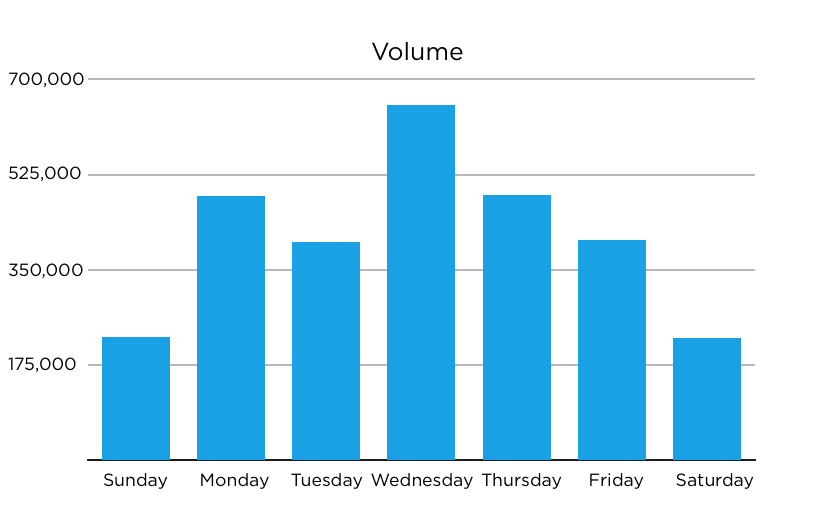 These results correlate inversely with engagement rates. The highest volume day, Wednesday, saw the worst open and click through rates. Whereas the best days in terms of opens and clicks trended to be days with the lowest volumes of emails sent.

This offers a potential explanation for the results.

This raises another question. Why didn’t the other studies pick this effect up?

All these studies came out over 3 years ago, and have likely caught the eye of most email marketers asking the same question as you are today. Tuesday and Thursday probably were the best times to send emails previously, but with the majority of marketers catching on the increased volume has resulted in decreased engagement.

So When Should You Send Your Email?

Based on these findings, you want to send your emails on the days other people aren’t. Wednesdays have the highest volume and in-turn have one the lowest engagement rates.

Right now it seems that sending your email on the weekend will give it the least amount of competition and therefore the best engagement rates. There’s no guarantee that it will stay that way though. If this article starts appearing at the top of your Google search then, volume will likely shift to the weekend, cancelling out the benefit. So our best advice is, when it comes to sending your marketing emails, whatever everyone else is doing – do the opposite.

To help visual these results, we’ve also created an infographic. You can view this below.

In addition to what day of the week is the best to send your email, so is the frequency you email your subscribers. According to the email addiction research, 76% of buyers want to hear from Brands twice a month or more, with 50% wanting hearing from you weekly or even multiple times a week. So the if you’re sending emails less than weekly you might want to consider increasing your frequency.