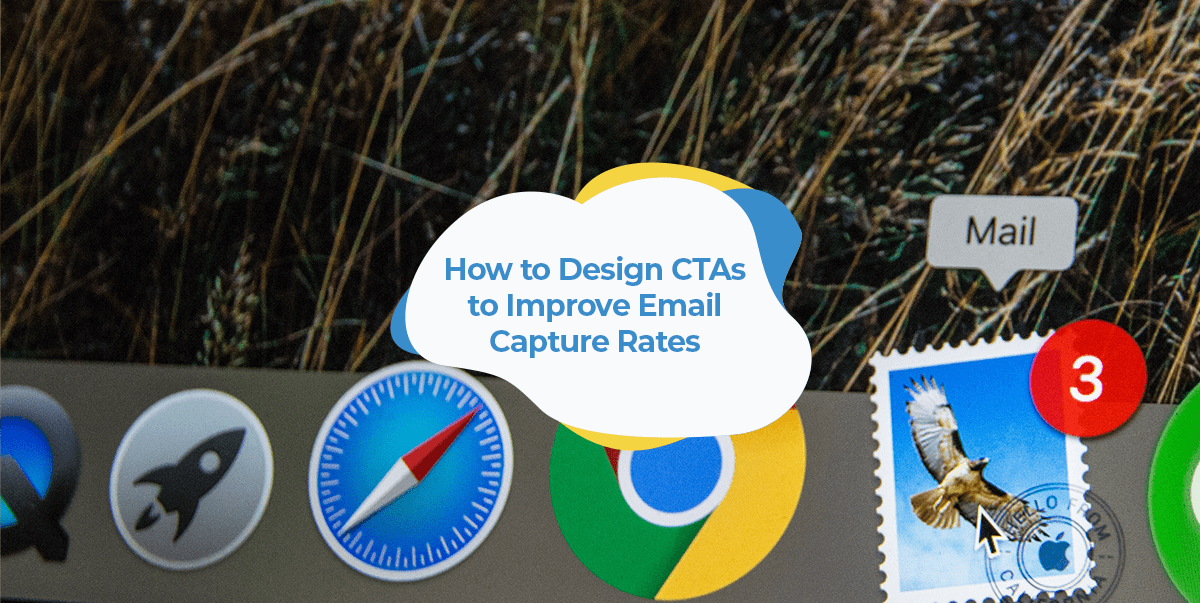 How to Design CTAs to Improve Email Capture Rates

Email marketing is one of the most effective ways to generate ecommerce sales. Without paying for any advertising space, you can use email to showcase your products and offer promotions to people who have already expressed an interest in your store.

Of course, to run an email marketing campaign, you’ll need a list of contacts to send your emails to. And the more contacts you have, the more sales you stand to make.

Publishing signup forms on your site allows you to convert visitors into contacts for email marketing. Some visitors will be interested enough in news about your products and exclusive deals that they won’t need to be persuaded to sign up.

You should also experiment with offering something in exchange for signups, such as a discount or an ebook, in order to increase your email capture rate (ECR).

The average ecommerce site has an ECR between 1% to 5%. If you’re struggling to bring your ECR above this average, the problem might be with the call-to-action (CTA) on your signup forms.

For signup forms, your CTA is the button that visitors click to confirm they want to receive emails from you.

Treating this button like an afterthought would be a mistake. The language used in the button, as well as the design of the button itself, will have a significant impact on your ECR.

You’re trying to get visitors to subscribe, so it’s only natural to use the word “subscribe” in the text of your CTA button.

You should avoid this urge, though. “Subscribe” is neutral; it doesn’t convey the value that the visitor will receive by signing up. If anything, “subscribe” communicates how you benefit from the arrangement: You need to build your contact list, so you want them to subscribe. What’s in it for them?

To convince more people to click, you need to get more specific and describe why the visitor should subscribe.

For example, Shopify offers a free 14-day trial in exchange for the visitor’s email address and highlights the value of this offer by labeling its CTA button “Start free trial.”

“Free” is a particularly powerful word for CTAs.

An MIT study once analyzed how much of a difference there was between setting the price of a product at 1 cent or free.

MIT asked a group of people to choose between a Hershey Kiss for 1 cent or a Lindt truffle for 15 cents. It’s important to have some context here: Lindt truffles are known to be a higher-quality product, and they’re usually more expensive than 15 cents per piece.

Seventy-three percent of participants chose the Lindt truffle, while only 27% went with the Hershey Kiss.

Then, MIT wanted to see what would happen if they lowered the price of each chocolate by one cent. They made the Hershey Kiss free and set the Lindt truffle at 14 cents.

In that case, 31% of participants chose the Lindt truffle, and a full 69% picked the Hershey Kiss. The difference in cost was the same, but dropping the price of the Hershey Kiss down from 1 cent to free made it more than twice as popular.

This study shows that the attraction to free giveaways isn’t entirely a logical, budget-based phenomenon. Psychologically, there’s just something satisfying about picking up an item for free, even if it’s only valued at 1 cent.

Nerd Fitness also demonstrates the power of free with its CTA button labeled “Free Stuff! Count me in!”

The “Count me in!” portion of this CTA is a nice touch, as it implies the visitor is currently missing out on something.

It’s easy to get distracted on the internet.

There’s social media, shopping, news, video games, movies and TV… why should a visitor take the time to sign up for your emails when there are so many other things they could be doing?

By simply adding the word “Now” to your CTA, as seen in the example from Gilt below, you’ll add a sense of urgency that encourages the visitor to click immediately.

The exclamation point in “Shop Now!” makes the message come across as even more urgent.

Marie Forleo took a similar approach with the CTA button text “GET IT NOW.”

“Get” may seem neutral, like “subscribe,” but it’s actually a clever way to remind the visitor they’re receiving something in return for their email address.

In addition to the language that’s used in your CTA button, you must address the appearance of the button.

Your primary goal is to get visitors to notice your CTA, and the most direct way to accomplish that goal is to make the button large compared to other elements on the page.

For example, take a look at how this CTA button for TOMS is as big as the text field that’s used to collect the visitor’s email address.

Color can also be used to draw the visitor’s eye to your CTA button. You may have noticed that all of the examples provided in this guide use a button color that contrasts with the color of the background. The Country Cook does an especially good job of this.

The design of The Country Cook features a soft color palette, with light blue headings, simple black text and a white background.

With the tips described above, you’ll be able to design a CTA that works well in theory. But does it work well in practice?

There’s no way to know until you try it. After you publish your CTA, your results will depend on more than just the text and appearance of the button. How your particular audience behaves, the attractiveness of the offer that the CTA is tied to and many other factors will have an effect. Also, what works for one store won’t necessarily work for another.

This is why you should use A/B testing to compare different versions of your CTA against each other. That way, you’ll know for sure you’re using the most effective CTA possible for your signup form.

Adam Ritchie is a freelance writer based in Silver Spring, Maryland. He currently writes for Shogun, and his previous clients include Groupon, Clutch and New Theory.