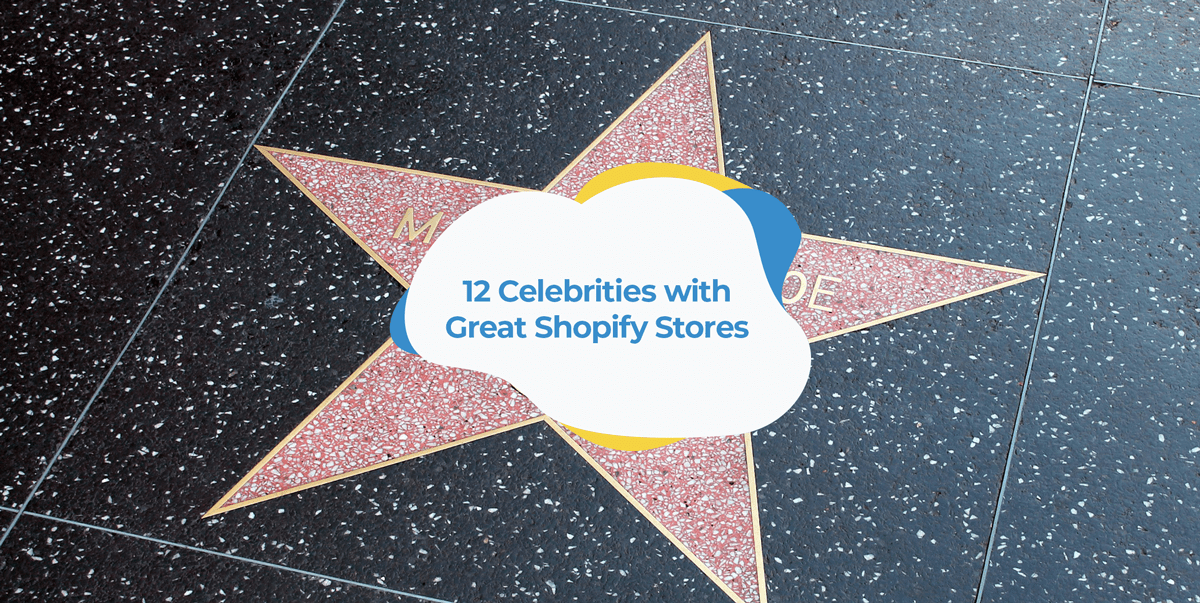 From Grammy Award-winning singers, to social media influencers, to reality show stars, celebrities have a big presence in the online retail space. In particular, many of them are using Shopify as their ecommerce platform of choice.

Shopify is a great cost-effective all-in-one platform that makes setting up and operating an online store really easy. Powering over 500,000 businesses in 175 countries, Shopify is a go-to choice for startups and small-to-medium businesses for their ecommerce operations.

This ecommerce platform has fast become a top pick for businesses of all sizes, though. Especially with the arrival of Shopify Plus, big brands are jumping on the Shopify train as well. Whether it’s to sell merch, music or fashion, Shopify provides celebrities a powerful platform that accommodates for their high volume business.

We often look to celebrities for inspiration when it comes to fashion, music and other trends, but take some pointers from the great Shopify stores from these 12 celebrities as well. 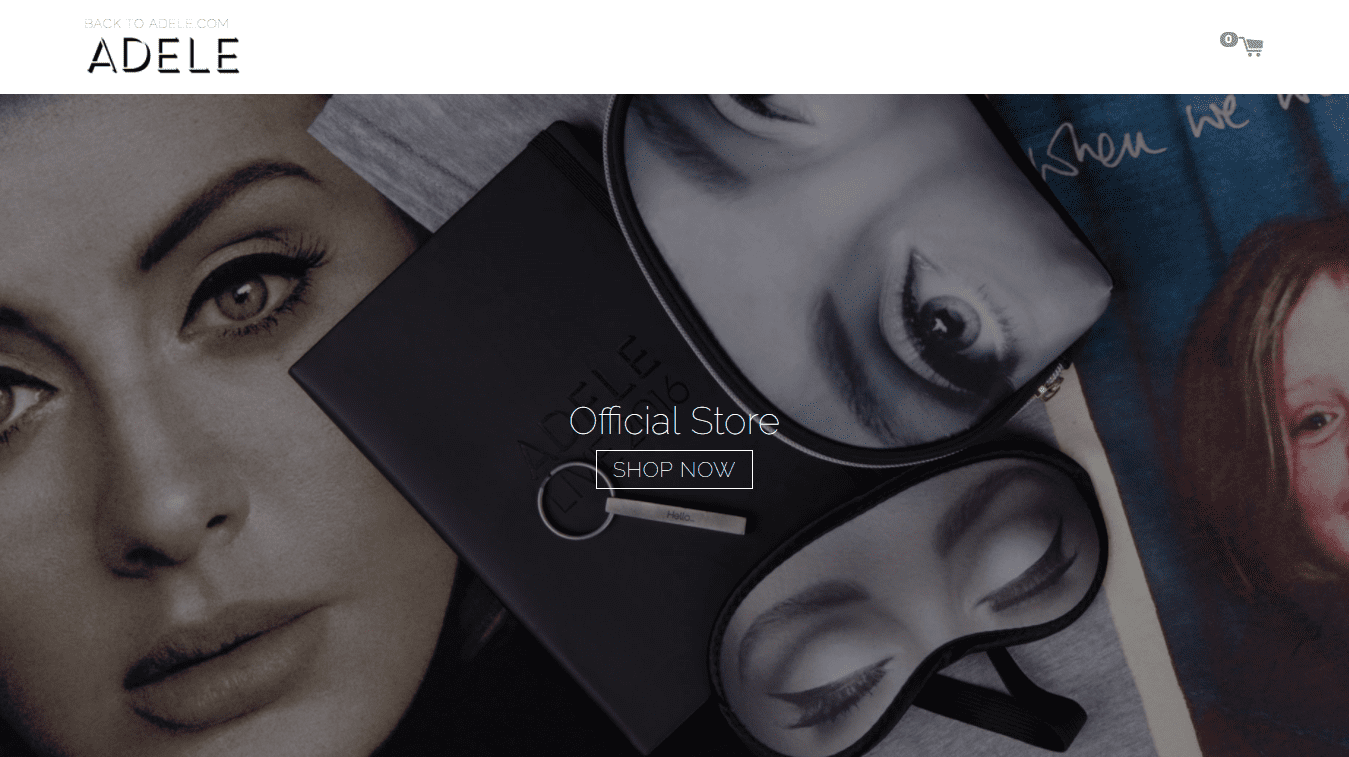 One of this decade’s biggest names in music, British singer-songwriter Adele has dozens of awards andlo titles under her belt. You can add Shopify store owner to her long list of achievement too. Riding the wave from the success of her album 25, Adele utilizes Shopify Plus to sell her merch.

Adele’s Shopify store design is quite minimalistic, using some photos of her on the homepage, and a simple white and dark grey colour scheme for the store page. This notwithstanding, it’s clear that her foray into ecommerce has been successful, with most of the products on her store being sold out. 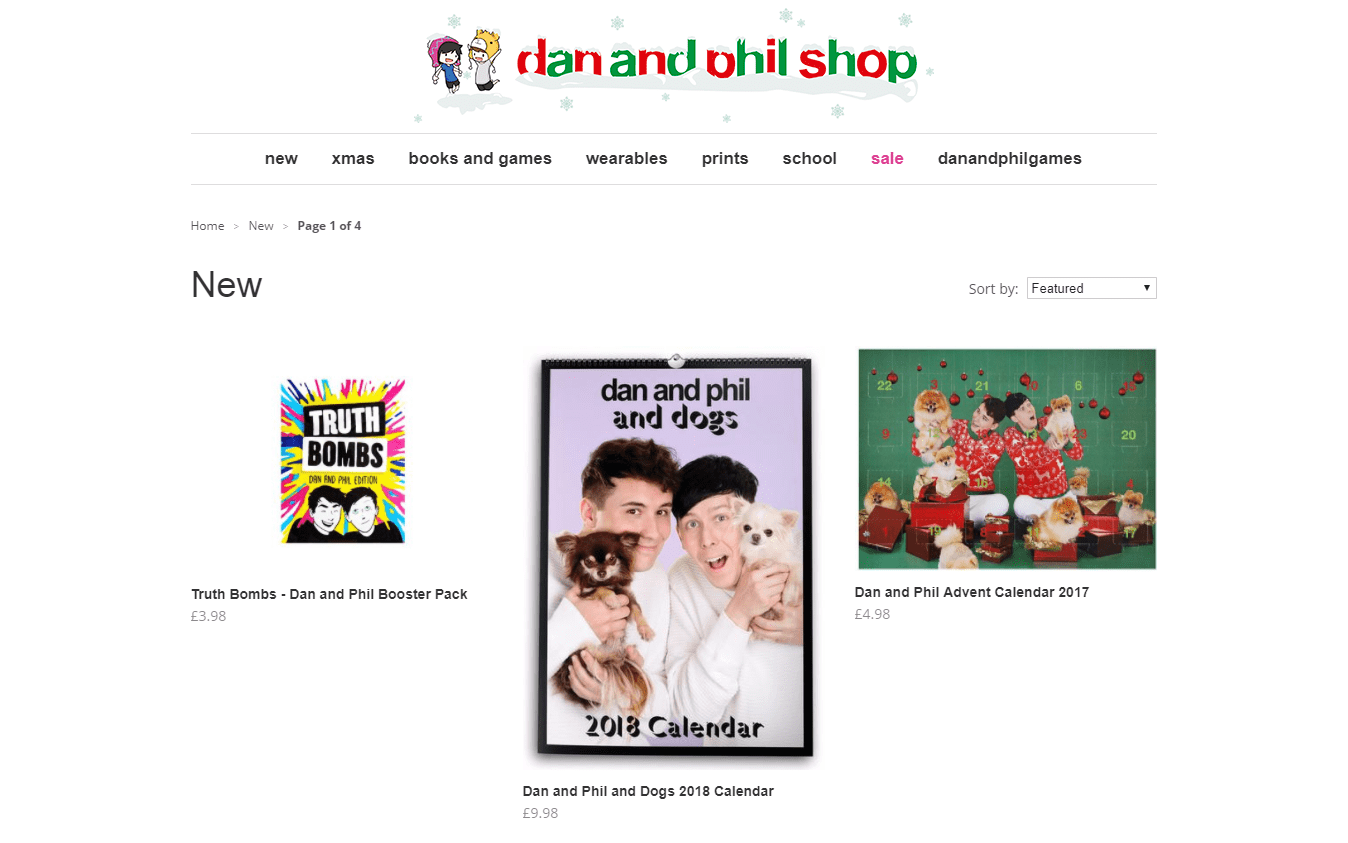 YouTubers Dan Howell and Phil Lester have collectively amassed over 16.8 million subscribers across their YouTube channels, and cultivated a massive fan base dubbed the ‘Phandom’. Their popularity has led to the creation of a wide variety of merch, such as clothing, accessories, posters, books, games, and so forth.

Their store is also quite simple, with a straightforward design that allows customers to easily navigate through their range of products. They also have an email collection pop-up and include an email collection form at the bottom of their site, helping them to grow their email list.

In 2011, Canadian rapper Drake created his own fashion line OVO Clothing in conjunction with his OVO Sound music label. In addition to a number of bricks-and-mortar stores, Drake has chosen Shopify Plus as the ecommerce store for OVO Clothing.

For anyone who isn’t Drake, I would recommend a slightly bigger font size and a bolder text colour so that customers don’t have trouble navigating through your store or reading product information. 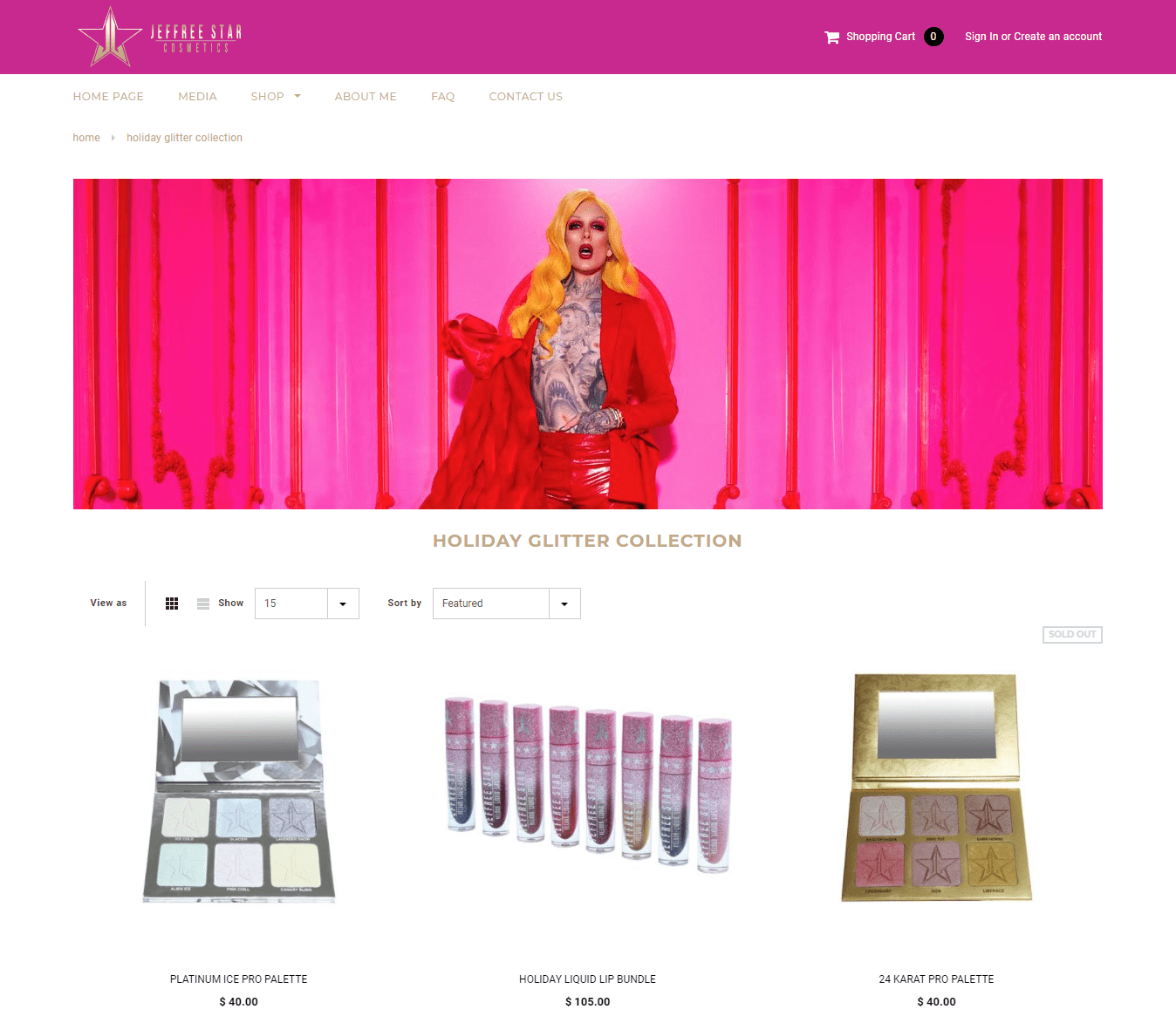 Social media personality Jeffree Star’s beauty and make-up channel is one of the biggest on YouTube, with over 5.5 million subscribers. Naturally, the next logical step for Jeffree would be to create his own range of cosmetics and fashion. Powered by Shopify Plus, Jeffree Star Cosmetics is one of the ecommerce platform’s top stores.

While some other ecommerce stores include a blog with written posts that provides customers with supplementary information that complements their products, the Jeffree Star Cosmetics store’s media section includes Jeffree’s YouTube videos embedded in the store to the same effect.

Justin Bieber’s Purpose World Tour was one of the biggest musical events of 2016 and 2017. To coincide with this tour, Justin set up his Purpose the Stadium Tour online store with Shopify allow fans the opportunity to purchase merch, such as clothing and physical music.

The store also includes a ‘Lookbook’ section, which provides customers with some inspiration to style their merch.

My one suggestion for your store would be to make sure shoppers can see the prices for your products. Justin’s dedicated fan base of Beliebers might be willing to pay top prices for Purpose Tour merch, but it’s probably a good idea to be upfront about prices with your customers.

Even a “God” like Kanye West uses Shopify. Although his store is pretty empty at the moment, Kanye uses the ecommerce platform to sell his fashion. Currently, the store asks visitors to enter their email addresses to receive information for when new items are released. 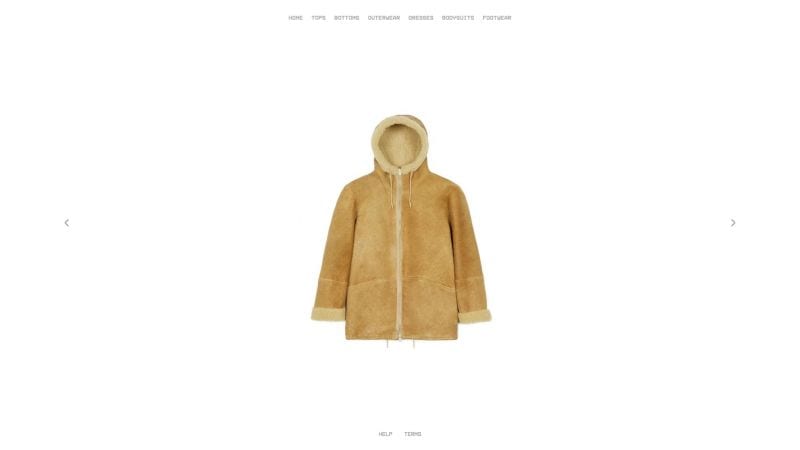 Matching the minimal clothing line, the design of his store is simplistic too, using a monochromatic colour scheme. Unless you’ve built yourself a personal brand like Kanye has, you’ll probably want to make your store a bit more accessible to your customers. Actually having products to sell might be a good idea too. The illusion of exclusivity might work for Kanye, but you probably won’t want to pay for a Shopify plan if you don’t have anything to sell. 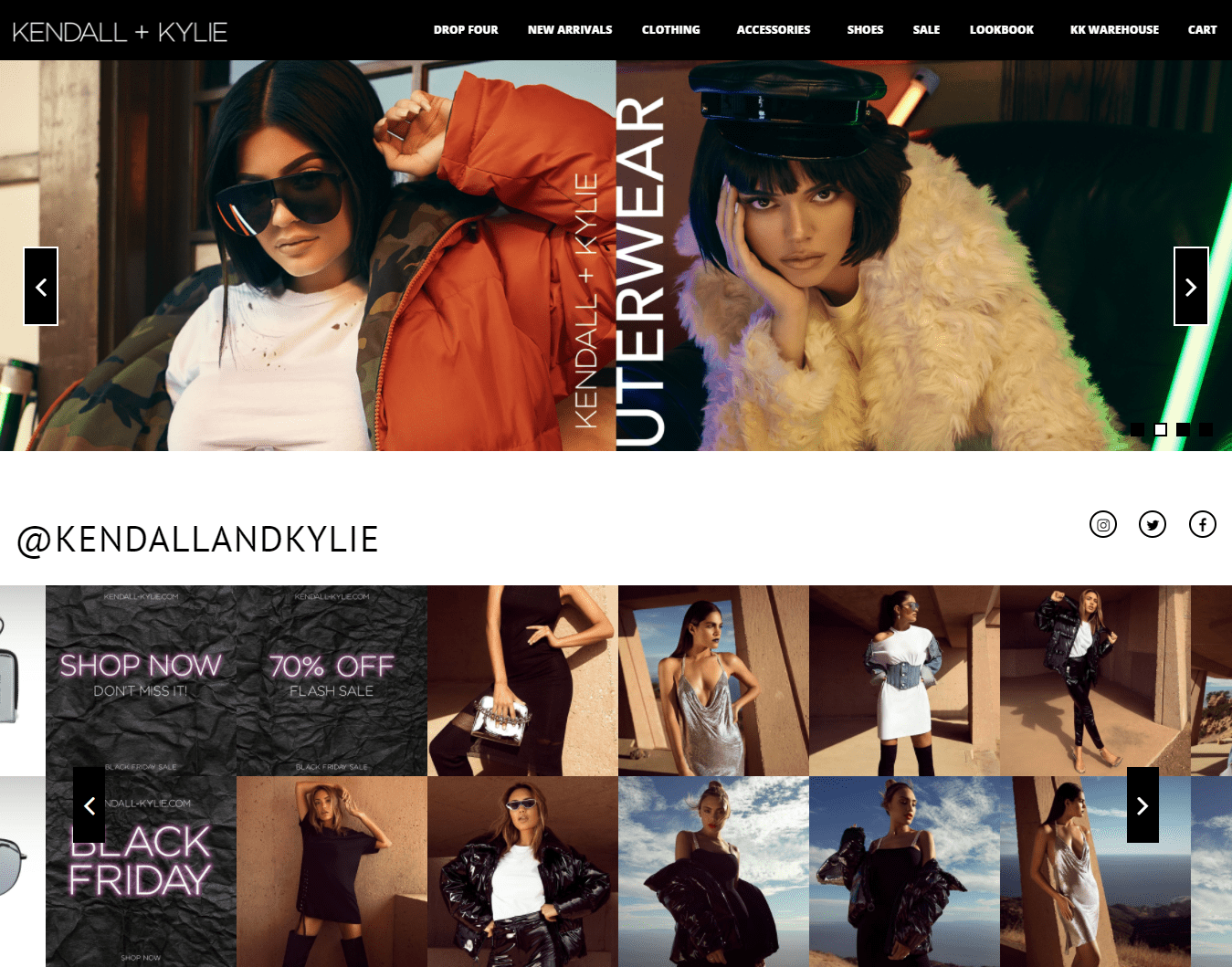 Kendall and Kylie Jenner are two of the biggest beauty and style influencers in the world. The sisters have joined forces and created their Kendall + Kylie online fashion store, where their millions of fans can purchase from their collection of clothes, shoes and accessories.

Taking their ecommerce store to the next level with Shopify Plus, the Kendall + Kylie store is very visual and easy to navigate, and feels just like any other online fashion store.

Kylie also uses Shopify Plus to run her hugely popular Kylie Cosmetics store. Known for selling out her new lip kits within minutes after release, Shopify Plus is the perfect pick for the young entrepreneur, as the platform can cope with huge spikes in traffic. 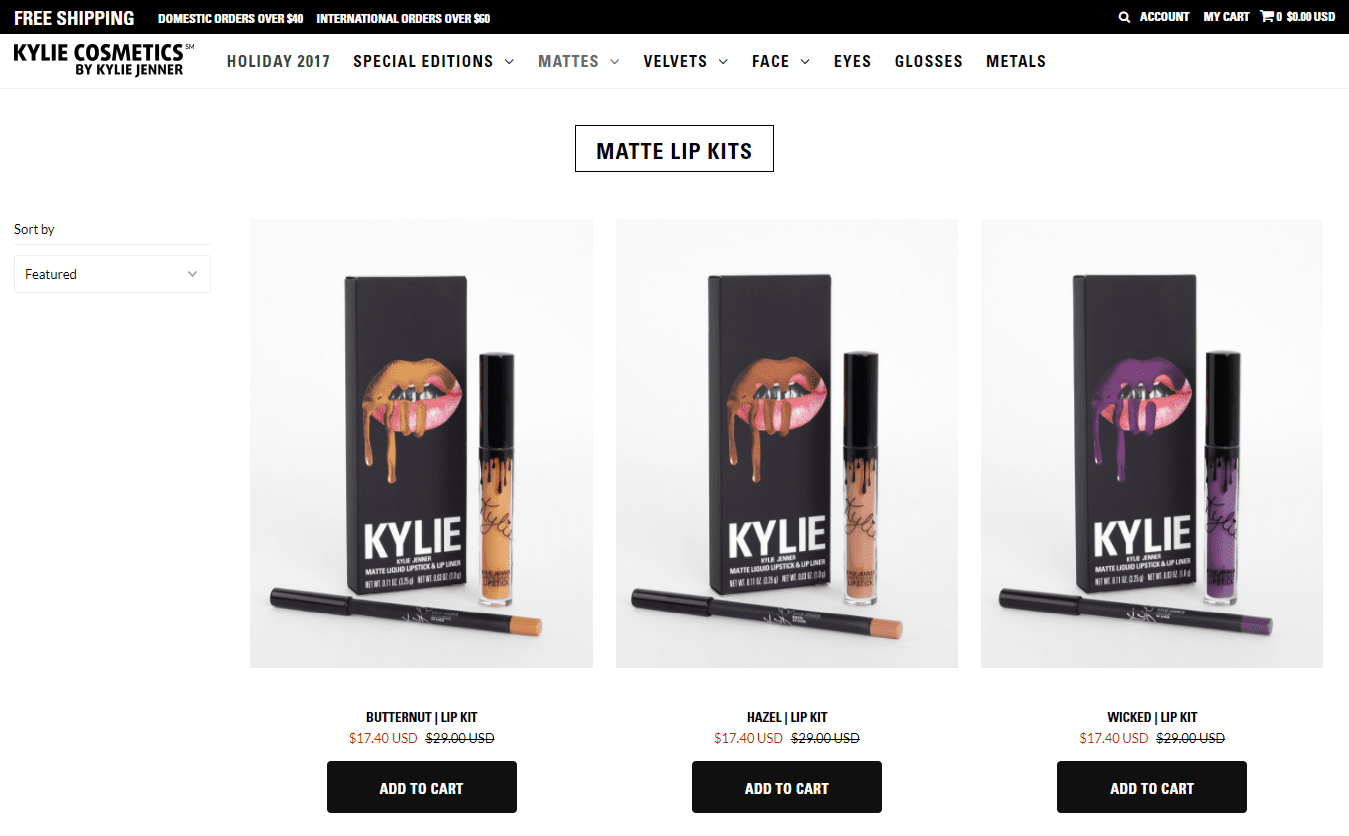 With such a loyal and dedicated fandom, it makes sense for Lady Gaga to launch her own online merch store with Shopify. The colour scheme of the store matches the cover art of her album Joanne, immediately establishing the singer’s brand on the site.

To help grow her email list of Little Monsters, the store has an email collection pop up that is triggered within seconds of engaging with the store.

Although pop duo LMFAO have been on an indefinite hiatus since 2012, their Party Rock Clothing ecommerce store is still up and running on Shopify. 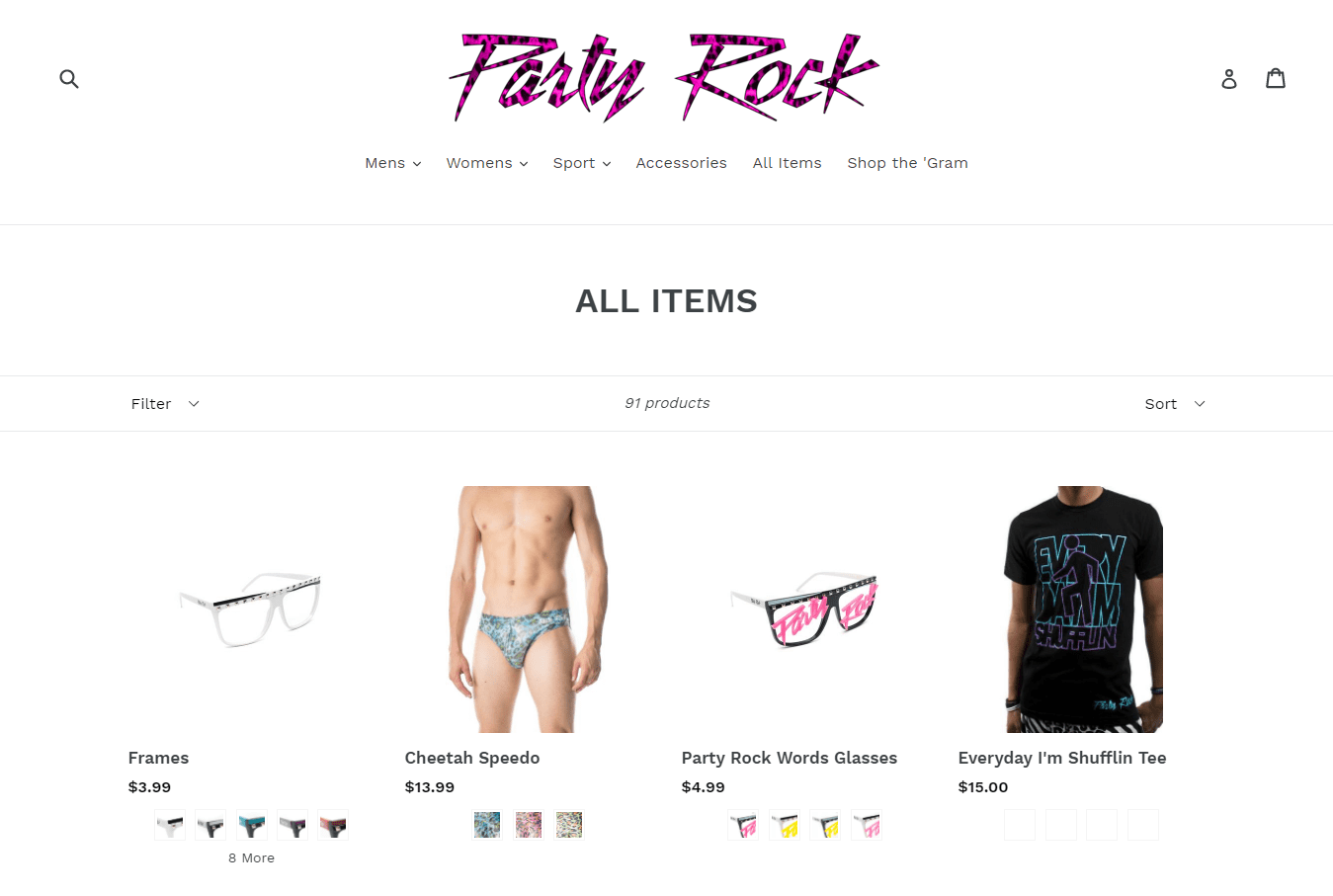 RedFoo and SkyBlu manage to establish their eccentric brand through their unique range of products, matching the loud and colourful outfits we see the uncle-nephew duo wear on stage and in their music videos.

The site is highly interactive, allowing shoppers to preview products in different colours by simply hovering their mouse of the product image.

Vine star turned YouTuber Logan Paul is one of the biggest Internet celebrities at the moment. After Vine was discontinued, he quickly grew an audience of over 17 million YouTube subscribers.

As a reference to his pet parrot and catch phrase “Be a Maverick”, Logan’s line of Maverick merch is available for his fans to purchase through his Shopify store.

Like most of the other ecommerce stores so far on this list, Logan’s store is visually, interactive and easy to navigate. In particular, members of the ‘Logang’ are able to add items to their wishlist, helping them to easily return back and view their favourite products.

W.A.S.T.E. is the go-to place for fans of alternative rock band Radiohead. Connected to W.A.S.T.E. Central, a social network for their fans, Radiohead also has an online store, which is run through Shopify.

Aside from being an actress, singer and fashionista, Zendaya is also the owner of her own women’s fashion ecommerce store. Shopify was the ecommerce platform of choice for her Daya by Zendaya fashion line. 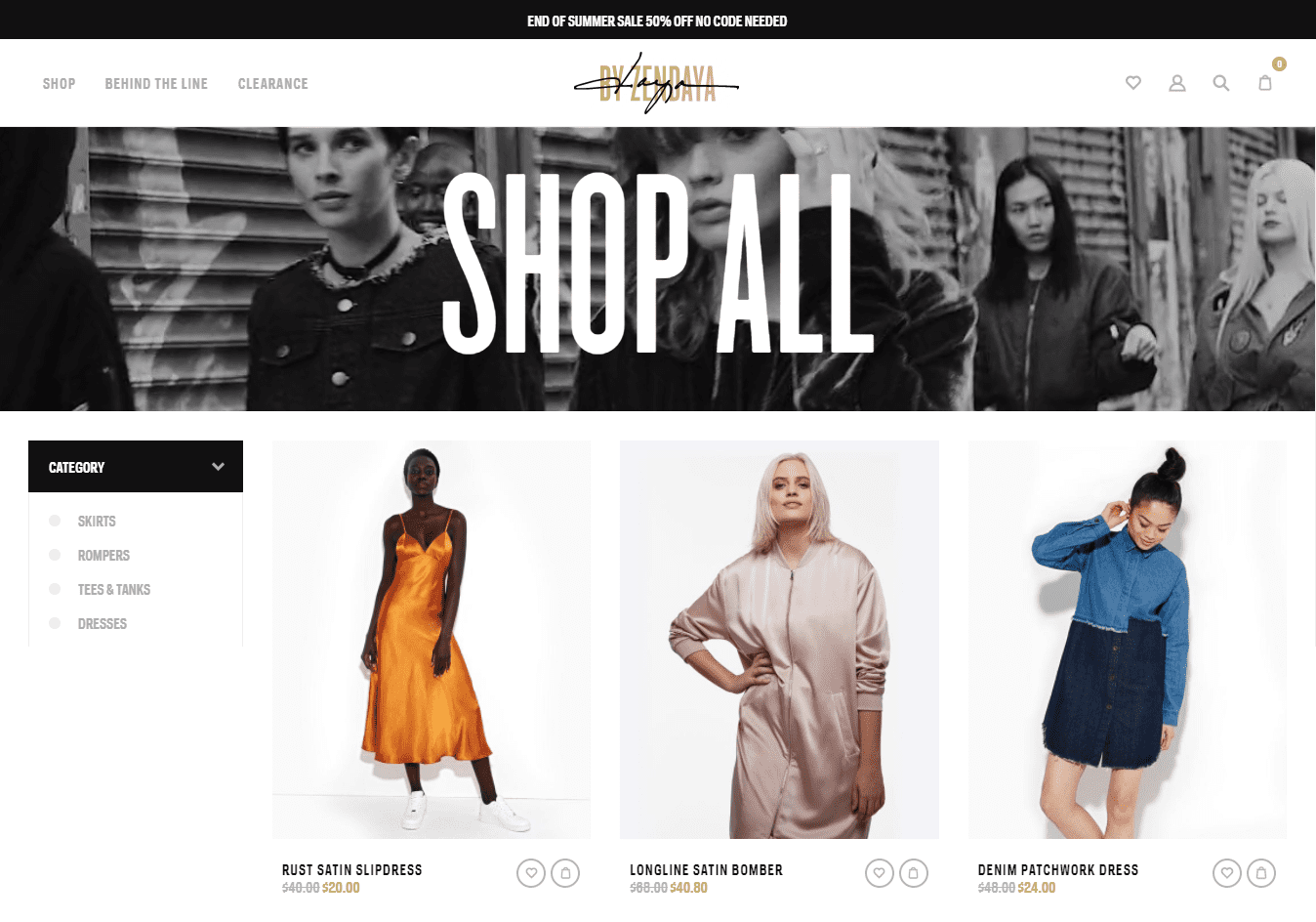 The store is comprehensive and professional, but also beautiful and sophisticated. Site visitors are greeted with a pop-up seconds after accessing the store.

Being a cost-effective option, Shopify is often a go-to service for smaller ecommerce stores. However, especially with Shopify Plus, celebrities and bigger brands are also choosing Shopify as the ecommerce platform for their online retail ventures. I guess celebrities ARE just like us. Why hire a bunch of professionals to create and run a website, when they have an all-in-one platform in the form of Shopify? These 12 celebrity Shopify stores demonstrate that creating a customized, comprehensive, professional, beautifully designed store is possible. And the best part is that Shopify provides celebrities, as well as us regular folks, with an easy and affordable option to do so.