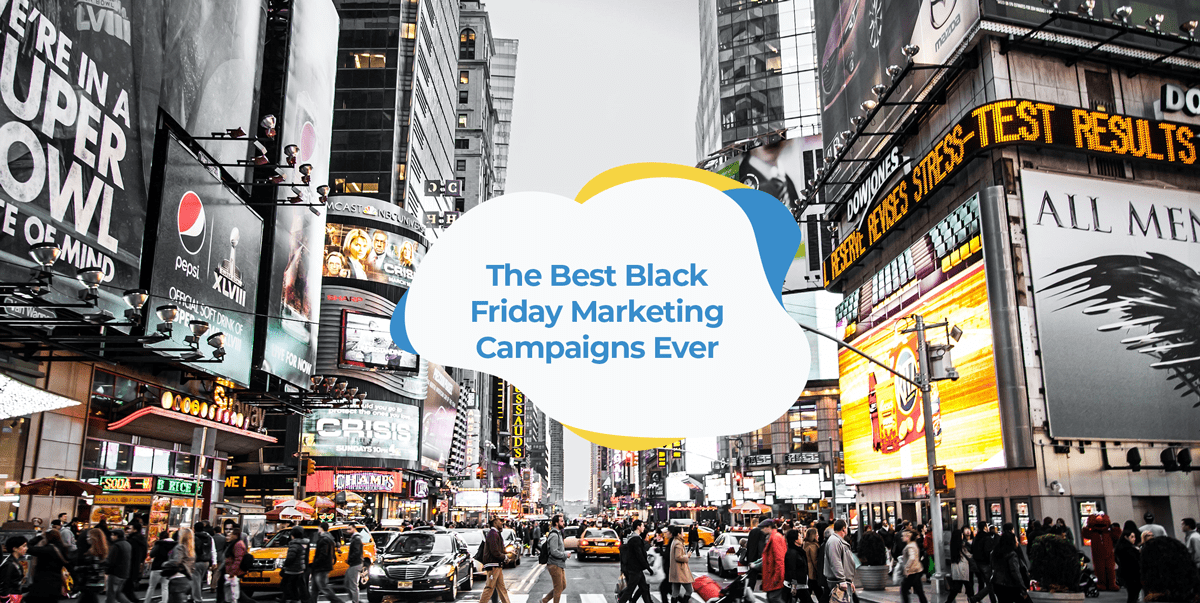 As with any sales event, you can be sure that retailers will be clamouring for shoppers’ attention and a share of their wallets.

And when it comes to sales events, few compare with Black Friday.

Not only is it one of the biggest single days for sales, but it also kick starts the holiday shopping season. The time of the year where retailers and merchants roll out their biggest marketing campaigns.

This gives rise to some of the most creative, well executed campaigns you’ll see all year round.

So whether you’re just curious to check out some of the very best Black Friday marketing campaigns of all time or are looking for inspiration for own campaigns, we’ve put together this list.

It’s no surprise that some of the greatest marketing campaigns for previous Black Fridays involve email. According to Shopify, email marketing is the highest converting channel for Black Friday promotions with an average conversion rate of 4.29%.

Email also gives you plenty of scope in terms of marketing automation, making it an incredibly easy channel to succeed with.

As far as inspiration for your own email campaigns, look no further than the examples below.

The genius behind Apple’s email marketing is how they’ve staggered out their emails in the lead up to Black Friday/Cyber Monday weekend.

Instead of just blasting out an email campaign on Friday morning, they started early letting them build anticipation.

This started with an email announcing (or teasing) their sale a couple of weeks before the sales weekend. As the date approached, a second email highlighting Apple’s exact offering was sent a week in advance.

By advertising their offer in advance, Apple is able to capture a greater share of consumers’ wallet before they decide to spend their money on other purchases.

If you’re looking at running your own Black Friday email marketing, this is a strategy you can easily adopt too. For more tips on running email campaigns at this time of year, check out our Black Friday sale email tips here.

Email marketing isn’t that useful if you don’t have anyone on your email list.

Even though we doubt that Steve Madden’s email list was that small to begin with, they killed two birds with one stone with their early access email campaign.

Offering people early access to your deals and offers makes them feel important and a part of an exclusive club. It also creates a sense of urgency as people want to take advantage of the opportunity before the offers are opened up to the public.

On Steve Madden’s end, they’re growing their email list which lets them establish a long term relationship with their Black Friday shoppers. As opposed to just making a quick sale from them and not engaging with them again.

As Black Friday shoppers increasingly ditch bricks and mortar stores for the convenience of online shopping, it’s no surprise that retailers are also increasingly turning to social media.

This has led to some incredible social media campaigns.

Unlike with traditional media, you aren’t just broadcasting your message to your target audience. Instead your audience is able to respond back to you and interact with your brand.

Smart social media marketers understand this and use it to their advantage. Just like Kohl’s Black Friday campaign.

By asking their audience questions across their social accounts in the lead up to and during Black Friday, Kohl’s earned plenty of social media engagement.

Social platforms like Facebook and Twitter love engagement on your posts. It increases the organic reach of their posts and lowers costs for any paid reach they may have been getting.

If you follow in the lead of Kohl’s, just make sure you adquently monetize the attention by placing some clear calls to action in your posts. At the end of the day, you want to be converting people into customers after all.

You don’t need a large social media following to run a successful social media campaign that reaches plenty of people.

Pieminister decided to team up with a well-known homeless charity to give away pies to shelters on Black Friday.

By partnering with a much larger organization with a greater social following, Pieminister was able to expand the reach of their posts without spending big on advertising. This is particularly valuable when your competitors are likely bidding big over the holiday shopping season.

The fact that Pieminister also found a heartwarming and worthwhile cause also helped with gaining organic traction on social.

Even though you might not have the budget to execute your own video ads, these ads are still worth a watch.

It also helps that the ad is well and truly on brand and will resonate with their target audience.

Being Kohl’s second entry on this list, it’s fair to say they do a great job with their Black Friday marketing.

This time they’ve created a parody of Rebecca Black’s Friday complete with their own offers.

There’s no denying that this is an old ad now, but that shouldn’t detract from how great it was when it ran.

Rebecca Black’s Friday is an incredibly easy song to get stuck in your head, something that Kohl’s was aiming for with their ad too. By capitalizing on a social media phenomenon at the time, the ad also has a decent amount of shareability.

Are you already sick of seeing so many Black Friday ads? Well we’ve got bad news for you: you’ll be seeing plenty more of them as November 29th draws closer.

Good news is that these anti-Black Friday campaigns will serve as a good antidote.

These are campaigns from retailers who are going against the grain of trying to maximize profits over the shopping holiday.

Whether it’s to raise awareness of ethical consumption, a charitable cause or just to make a mockery of Black Friday, here are the greatest ant-Black Friday campaigns.

Patagonia is a brand that’s already well known for its emphasis on ethical consumption, and their Black Friday campaigns more than live up to this reputation.

In 2011 they launched one of the first ever anti-Black Friday campaigns with their “Don’t Buy This Jacket” ad in the New York Times and online.

This wasn’t a one off either.

In 2016 Patagonia donated 100% of its sales on Black Friday to nonprofit environmental groups around the world.

Making a mockery of Black Friday has become a habit for Cards Against Humanity.

Last year they held 99% off sale on a range of items from a Sony 4K TV to a bust of President Obama. They even sold cold hard cash letting you score a $100 bill for just $1.

As you’d expect, supplies were severely limited on all the items, but the sale was real!

In 2014 they even took down their entire product range from their online store and offered just one product instead: literal poop.

But for all their pranks, their best is perhaps when they increased their prices by $5.

Creating Your Own Black Friday Campaigns

We’re not going to lie. It’s going to be hard to match the creativity of these Black Friday campaigns.

If you are now planning to go and create your own campaigns, you should at least have some inspiration. If you’re still struggling to come up with some ideas, check out what 18 experts came up with when we asked for their top Black Friday campaign ideas.

As far as your email campaigns go, we also have plenty of other resources to help you including examples of great Black Friday emails and a list of subject lines you can use.

We’ve placed all of these resources in our Black Friday/Cyber Monday hub that you can access below.

Best of luck with your Black Friday campaigns!