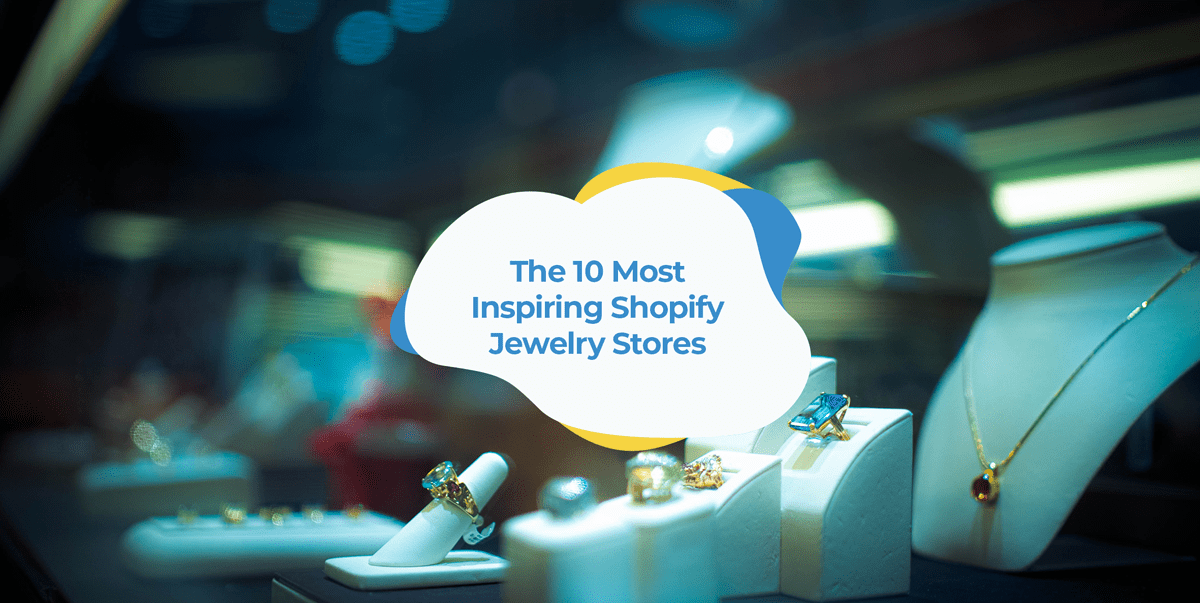 The 10 Most Inspiring Shopify Jewelry Stores in 2021

Are you thinking about starting your own online jewelry store on Shopify?

Whether you’re looking for some inspiration or just wanting to check out what the competition is doing, we’ve put together this list of Shopify jewelry stores to inspire your own.

And it’s not just the websites that are impressive, but the stories behind how the founders started selling jewelry online.

Many of them also started where you likely are now: with a passion for jewelry and looking to take their side hustle to the next step.

So let’s check out, in no particular order, their Shopify jewelry stores and the stories behind them.

The top jewelry stores on Shopify

Vivan Frank was founded by Simona who used to work in the film industry as a production manager for feature films.

All that changed however after the birth of her first son, Frank, when she decided to stay at home to raise her son.

Originally Simona’s ventures in jewelry making started as a hobby where she would design and make pieces for herself. Once her friends were impressed with her work, she started making pieces of jewelry for them as well.

It wasn’t long before she started selling her jewelry to customers and launched her highly successful Shopify store.

Today Vivien Frank’s jewelry is sold around the world and has been featured in magazines including Annabelle, Vogue UK, and Glamour.

Pura Vida (Spanish for ‘pure life’) Bracelets is a California-based jewelry business that sells hand-crafted bracelets and jewelry through their Shopify store as well as physical boutique stores.

The inspiration for the store came when the co-founders Griffin Thall and Paul Goodman met two artisans during a trip to Costa Rica to celebrate their graduation.

They were so impressed with how the bracelets captured the beauty of Costa Rica that they teamed up with the artisans and started selling them back home.

Today Pura Vida helps over 800 artisans in Costa Rica earn money from their work by selling millions of bracelets every year and is the 40th largest Shopify store in the world. And it’s no longer just bracelets, but also rings, necklaces, and charms among many other accessories.

The story of Vincero Watches started when the three co-founders moved to China to start designing and manufacturing their own products back in 2010.

What they noticed was an overabundance of watches being mass-produced with as many corners cut as possible to keep costs low. So they set out to create their own watches with their own supply chain to ensure superior quality at every step of the production process.

The end result is the community they’ve built up around their brand who value quality and refuse to wear jewelry made with shortcuts taken.

And it’s not just watches they sell through their Shopify jewelry store either. The Vincero brand has expanded to also include bracelets, sunglasses, and wallets.

If this motivates you to get creative with what and how you sell, try using Facebook Ads to advertise your Shopify store or products and consider using one of these methods to reduce CPM for advertisements.

Founded in Toronto in 2011, Vitaly prides itself on being an ‘experimental design movement’ producing genderless pieces of jewelry that “build upon the framework of global cultural directions”.

Most of their jewelry is made from stainless steel as this material does not rust or tarnish and is, more important to their jewelry brand, highly recyclable.

Based in Brisbane, Australia, Molten Store is a jewelry store with a focus on sustainability and upcycling jewelry.

In addition to producing high-quality jewelry from reclaimed materials, Molten Store also has a “swap your jewelry” program that lets customers trade in their unwanted jewelry for store credit.

It’s not just about sustainability though, Molten Store’s core mission is to “connect customers with their dream jewelry” and are self-described “vintage jewelry history buffs.”

Perhaps the best way to describe their Shopify store is as the “antique store for millennials.”

Missoma is one of the most visited Shopify jewelry stores in the world.

Because of this, they are quite a bit larger than most of the other Shopify stores on this list. But that doesn’t mean they haven’t strayed from their mission or are any less inspiring.

Because of their size, they also have an extensive collection of different types of jewelry and have fantastic product reviews.

YCL Jewels was founded by Fabienne, a self-taught artisan jewelry maker and designer who started her jewelry business after quitting her job as a nurse.

While YCL has grown since Fabienne started it back in 2013, all of its pieces are still hand-made and most are still designed in-house as well.

YCL also places a particular emphasis on limited edition jewelry where once a collection is sold, it’s never produced again.

King Ice is a bit different from other Shopify jewelry stores on this list in that instead of producing feminine pieces of jewelry, they offer high-quality hip-hop jewelry inspired by urban culture.

Founded in Los Angeles in 2007, King Ice’s specialization in streetwear culture and aim to bridge the gap between artist, culture, and people has led them to become an internationally recognized brand.

They have also collaborated with plenty of big-name brands including Warner Bros. Viacom, 20th Century Fox, Death Row Records, and Snoop Dogg to supply jewelry in films and music videos.

By Charlotte was founded in 2012 by Charlotte Blakeney and was inspired by her love of “semi-precious stones, crystals, symbols and their deeper meanings”.

Today, By Charlotte still aims to instill every piece of jewelry they make with “deeper meanings of spirituality and enlightenment” to “inspire and empower the wearer”.

In addition to their online Shopify store, they also sell jewelry in their flagship boutique store.

Gwen Delicious’ story started when its founder, Bonnie Doyle, used to watch her father design and create jewelry in his own workshop.

Bonnie didn’t immediately follow in her father’s footsteps, however. Originally she had a day job and it wasn’t until she became a stay-at-home mother after health complications with her second child that she started Gwen Delicious.

What started off as a creative outlet to deal with life’s challenges is now a full-time business and Bonnie’s husband has even quit his job to help the business grow as well.

In terms of the jewelry they sell, it’s a wide range of fine jewelry including necklaces, rings, earrings, and cufflinks.

So there you have it, our top picks for the best Shopify jewelry stores in 2021.

Hopefully, you’re now fired up and eager to start selling jewelry online, or if you’ve already started selling jewelry through Shopify, to make improvements to your store so that they’re just as inspiring as these are.

When you get your store up and running, be sure to check out our email marketing for jewelry stores guide to ensure your store is as successful as it can be.

If you know of any other great jewelry stores on Shopify, feel free to mention them in the comments below!