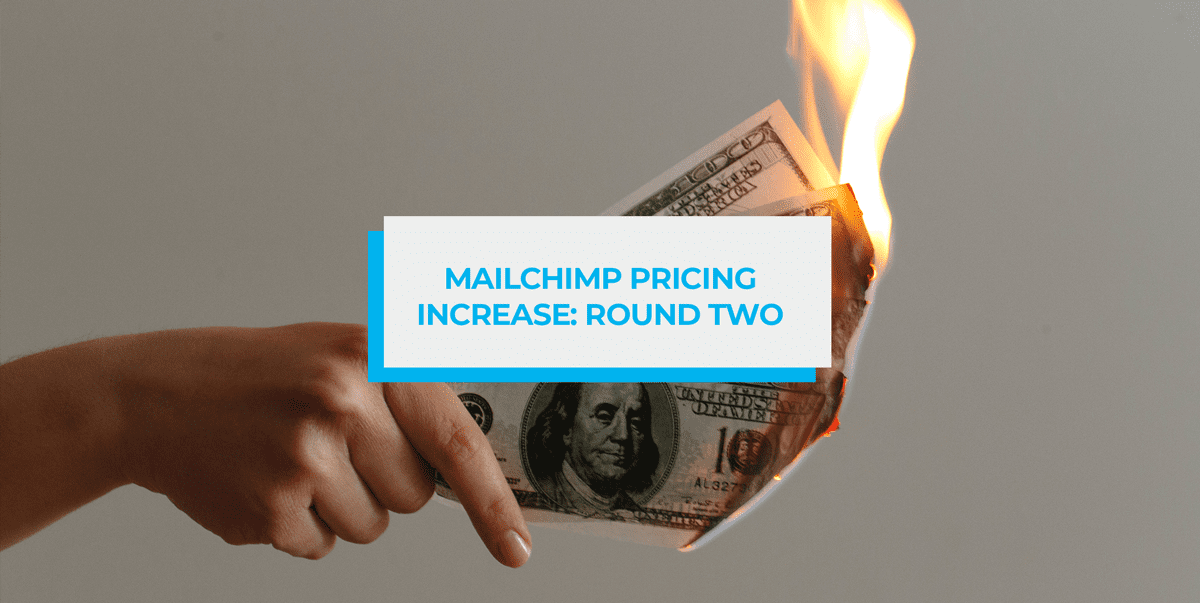 Mailchimp has been on a roll recently.

Earlier this year thousands of Shopify merchants were left in limbo when Mailchimp announced they were ending their Shopify integration.

Not long afterwards users were then hit with news of a Mailchimp price increase.

This included a move to pricing model that charges based on a user’s total number of contacts. Not just active subscribers, but also any unsubscribed and transactional contacts in a Mailchimp user’s account.

Thankfully for existing users, Mailchimp decided to grandfather them in on their existing pricing plans. So the pricing increases earlier this year only affected new users signing up to Mailchimp.

However as of just a few days ago, Mailchimp has decided to remove the grandfathering. Meaning that all longtime Mailchimp users have had their loyalty rewarded with price increases.

What Exactly is Going on with Mailchimp’s Pricing

To help make sense of what’s happening with Mailchimp’s pricing, it’s worthwhile taking a step back.

These pricing changes have occurred in the context of a broader pivoting away from being an email marketing platform to an all-in-one marketing automation platform.

This explains why Mailchimp is now charging for contacts you can’t even email.

So when someone unsubscribes from your email marketing, you will need to ensure you archive them otherwise you’ll continue to be charged for having their email address in your audience.

When Will Mailchimp’s Price Increases Hit?

Mailchimp users who signed up after May this year are already paying the higher prices.

Users who were originally told their pricing plan would be grandfathered in (that is, told they would not be charged more) will start having to pay more as of their October billing cycle.

This gives Mailchimp users very little time to adapt to the new prices or find a Mailchimp alternative.

How Much is the Increase?

The bottom line for many merchants with these changes is how much more they’ll have to pay.

Given how complex Mailchimp’s pricing tiers are, it’s hard to give a concrete answer here. That said, these changes are not small tweaks to pricing.

Email Vendor Selection is reporting that the increase is in the range of 15-20%.

This is a massive price hike for a small store to have to absorb with very little notice.

A Rough Deal for Mailchimp Users

This year hasn’t been great for Mailchimp users.

Let’s say you’re a Shopify merchant who’s been using Mailchimp for your email marketing for a year now.

In March you were told that Mailchimp would no longer integrate with your Shopify account. Leaving you to either rely on a third party connector or go without sending relevant, targeted emails.

Then Mailchimp announced their price hikes. But they promised that you wouldn’t be affected and that you could lock-in your current pricing.

Now they’re giving you a month’s notice that they’ve changed their minds and you’ll have to start paying more anyway.

They’re saying that the higher prices and charging for unsubscribed contacts reflects that Mailchimp is no longer just about email. But also about sending postcards, creating landing pages, etc.

At the end of the day, you signed up to Mailchimp so you could email your customers. Now you’re being forced to pay more for extra features you may never want to use.

It’s no wonder Mailchimp users are voicing their anger.

Thankfully Mailchimp users have plenty of alternative email marketing solutions to choose from.

Many of which are cheaper than Mailchimp and don’t charge for contacts you can’t email. Such as SmartrMail.

Not only is SmartrMail a great Mailchimp alternative that makes email marketing easy for merchants. But we’re also offering free migration to anyone on Mailchimp who has finally had enough.

That is, we’ll move across all of your Mailchimp lists, automations and templates across to SmartrMail for free.

As an added sweetener, we’ll also give you a 25% discount off any of our paid plans for 12 months! Just use the code MC-LEGACY when upgrading to a paid plan.

Check Out The Offer

Don’t forget that we also offer a free plan for merchants with up to 1,000 subscribers (that’s actual subscribers you can send an email to) and up to 5,000 monthly email sends.

So if this latest announcement from Mailchimp is the final straw, install SmartrMail’s free trial now. You’ll be joining plenty of other former Mailchimp users who’ve switched to SmartrMail and never looked back.