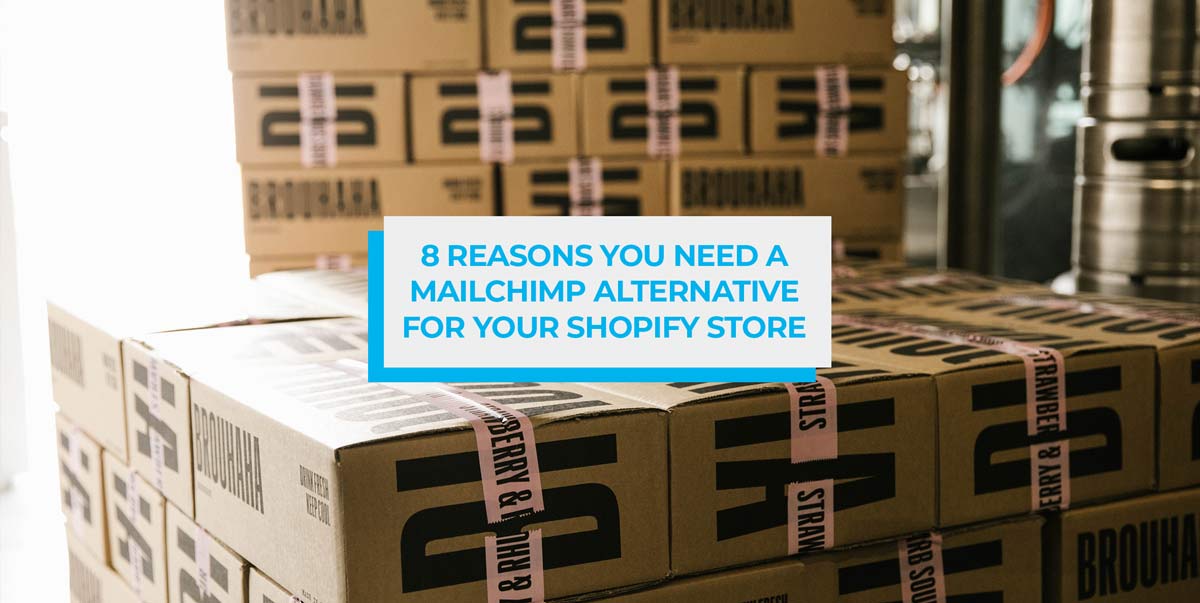 When you think of tools to design emails to send to a list of people, MailChimp is probably the first to come to mind. Despite the best efforts of MailChimp’s competitors, this market leader position remains intact. And this is understandable – MailChimp’s pricing and discounts for charities and nonprofits makes them an attractive option to a whole range of organizations.

But what if your goal with email marketing is more than simply communicating with people? What if you want more powerful features, like list segmentation and marketing automation, than MailChimp offers? And, the question this article will focus on, what if your aim is to sell more products from your Shopify store?

Well, let me show you why SmartrMail, an ecommerce email marketing tool, is a much better alternative to MailChimp for Shopify stores.

MailChimp Was Never Built with Ecommerce in Mind

There are many reasons why you’ll run into many MailChimp issues when trying to use it for your Shopify store, but they all boil down to one: MailChimp was never built from the ground up for ecommerce stores.

This results in ecommerce features, like product retargeting emails, either being half-baked and severely limited or just not possible with MailChimp. Here are just some of the ways MailChimp’s lack of focus on ecommerce will hurt your store:

With MailChimp, you can only add product recommendation blocks manually into emails you compose yourself. Contrast this SmartrMail. With SmartrMail you can automated multiple emails to send to your subscribers filled with products our recommendation engine has determined they’re most likely to purchase.

You also have more control over the how these products are recommended. For example, you can set the recommendation engine to favor items in your store you’ve just added, or slow moving inventory that you’re having a hard time selling.

You can also set the product recommendation emails to prefer items in your store that are on sale. Meaning that if you have regular sales, you can set up an automated sale email that not just advertises products that are on sale, but those that the individual subscriber is most likely to purchase.

All of this can be set up with just a few clicks in SmartrMail, after which you don’t need to spend any more of your time or effort.

This is simply not possible with MailChimp.

Even though the number of ways you can segment your MailChimp list has been expanding, they are still lacking many ecommerce based segmentation rules.

As an example, with SmartrMail you can segment your list based on whether or not a customer purchased a product from a particular collection within your store. This kind of segmentation makes it easy to set up cross-sell emails.

Let’s say you run a fashion ecommerce store and someone purchases a product from your pants collection. With SmartrMail you can segment these customers out to run an automated email campaign to recommend shoes you sell to them. Setting up the automation and targeting it to the right customers is achievable with just a few clicks in SmartrMail.

As MailChimp doesn’t allow you to segment by product collection, achieving the same result would require you to create segments for purchasers of every product within the collection. Something that is much more time intensive.

This shows how MailChimp was designed with one off email blasts in mind, not setting up advanced automated flows.

While MailChimp does have an abandoned cart option available to its users, its offering is severely limited.

Their abandoned cart template comes with minimal text and wording options. Even more worrying for ecommerce store though is the limited scheduling abilities for abandoned cart emails. With MailChimp, you can only automate your cart abandonment emails to send 1 hour, 6 hours, or 24 hours after a potential customer has abandoned their cart. While there’s nothing wrong with these particular times, most ecommerce stores will benefit greatly from more flexibility.

Of course, with SmartrMail you have much greater flexibility with scheduling these emails. You can even create your own custom intervals if you’d like.

Shopify is the most popular ecommerce platform out there. Their app store also boasts thousands of apps designed to let Shopify store owners sell more stuff.

Given that MailChimp is also a popular tool, you might be surprised to learn that it is not available on the Shopify app store.

While you can still add MailChimp to your Shopify store by going around the app store and installing it directly from MailChimp, doing so has implications. Firstly, installing an app from outside Shopify’s app store means that it may not meet their app quality guidelines. It also means you don’t have the convenience of being billed from within your Shopify account. Instead you have to manage it separately.

Admittedly, being billed outside of Shopify isn’t a major inconvenience and MailChimp is a well respected organization so you can install their app from outside of the app store with confidence. But their absence from ecommerce’s most popular app store is another sign how ecommerce is all-too-often just an afterthought for MailChimp.

UPDATE: As of March 22, 2019, MailChimp has announced that no new users will be able to integrate with Shopify and that existing MailChimp users with a Shopify integration will no longer be able to use it as of May 12, 2019. This means that for all intents and purposes, MailChimp and Shopify no longer support each other. We’ve written an article on what this means for Shopify stores, but suffice to say that MailChimp is no longer a viable option for Shopify merchants.

As MailChimp was originally designed to send one off email blasts, you might think they would make doing so quick and easy. But, especially for ecommerce users, you’d be wrong.

When you want to send a manual email to your subscribers, you’ll most likely want to include some products in it. To insert a product into your email with MailChimp requires multiple clicks and manually adding the product’s description.

Compare this with how quick it is with SmartrMail.

SmartrMail’s product lookup feature lets you type in a product’s name and add the product to your email complete with its image, description and price in just one click.

MailChimp’s Free Plan Isn’t Worth It

Despite all of the reasons mentioned so far, you might still be tempted to use MailChimp because of their free plan. Pretty much anything that’s available for free is tempting at first glance, but on closer inspection the appeal diminishes. MailChimp’s free plan is no exemption. Here are a few things to keep in mind.

Firstly, there are the obvious limitations: you are limited to 2,000 subscribers and you can only send up to 12,000 emails a month. If you max out your subscriber limit, you are then restricted to only sending six emails to each of your subscribers. An abandoned cart series of three follow-up emails already uses half of this allowance.

Not being able to send these emails can easily cost you sales. This lost revenue potentially could’ve more than covered the cost of an email service provider dedicated to ecommerce like SmartrMail.

In a very real sense, this is classical case of where free ends up costing you more money.

7) Not As Many Features

In addition to the lack of email and chat support after your first 30 days, ‘advanced’ segmentation capabilities are restricted to paying customers only. Meaning despite already lacking multiple ecommerce related segmentation rules, some of the other rules they do have are not available on the free plan.

Finally, in spite of all this, you might still be wanting to use MailChimp’s free plan while you get your new ecommerce venture started.

I get where you’re coming from. When you’ve got hardly any customers and your cash flow reflects it, you may not be in a position to invest a lot of money.

Instead you are considering MailChimp’s free plan as a temporary solution until your Shopify store finds its feet at which point you intend to migrate your email marketing to an ecommerce focused platform. The issue here is that as your business grows, your time becomes more scarce.

A major project like migrating your email templates, lists and automations to a new platform will likely just be put off and relegated to your backlog (graveyard) of tasks to complete. Migrating will just become more and more difficult as your store continues to grow.

As a result, you run the risk of being stuck with an inferior email marketing platform.

You can easily avoid all of these problems and give your ecommerce store a jumpstart by using an ecommerce focused email service provider like SmartrMail.

Better yet, if you’re already using MailChimp and looking to switch, SmartrMail has a one click migration tool. Choosing the right email app has never been easier.